To change the version of the map data that PC*MILER uses to calculate routes:

2.   Make a selection from the available options. Options will vary depending on which data sets are installed.

3.   The currently loaded data set will be displayed in the title bar of the map window, shown at the bottom of each page in any generated reports in Print View, and selected with a checkmark in the Change Data Set menu. 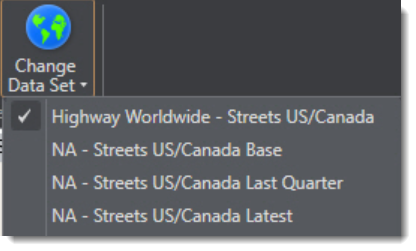 Note: "Base" is the data set most often used for rating. It is the data packaged with PC*MILER at the time that version was released. "Last Quarter" and "Latest" are data sets released between version releases of PC*MILER.

For PC*MILER (North America only), the options in the drop-down will include the base version data set plus any mid-year versions that have been released since the base version, including U.S. and Canadian street-level data if installed.

Streets data modules are available for local street addresses in Canada, the United States, Europe, and some countries in Africa, Asia, Middle East, Oceania and South America. Each module may be purchased separately. The correct data set must be selected before you enter an address. When you activate a data set, the correct region will automatically be active in Application Settings.