PC*MILER gives users the ability to enter and save up to 12 via points between an origin and destination to guide a route along user-preferred roads.

The via points you create can be designated as stops or waypoints. The “waypoint” designation means that these locations were added only to guide the route along desired roads. Waypoints are treated like stops on the map (routes travel through a waypoint town or city), but they don’t appear in the driving instructions in the Driver’s Report and are marked as a “Via” in the Detailed Route Report. Waypoints appear on the stop list as circles with a gray border.

Via points are saved in a set and the option to enter them will be offered whenever the route segment for which they were created is included on a trip. For example, vias for a trip leg between Baltimore and Chicago can be entered with a click of the mouse whenever Baltimore followed by Chicago is entered for a route.

To create a via point set, either before or after running a route

1. In a new route window, enter at least two stops.

2. Highlight the stop that you wish to designate as the origin. This need not be the origin of the route if multiple stops are entered. You will be creating via points between this highlighted stop and the next destination on the stop list. 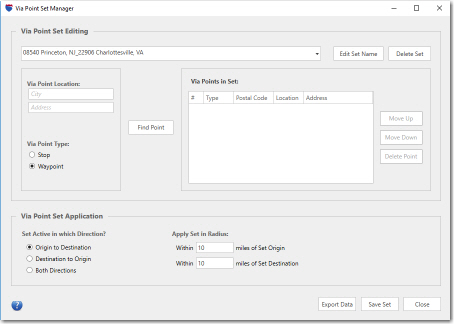 4. Under Via Point Location, type a PC*MILER location (city/state, postal code, etc.) in the top field and, optionally, a street address underneath.

5. Under Via Point Type, select whether the point you entered will be a Stop or a Waypoint.

6. Press Enter or click Find Point. PC*MILER will confirm that the location exists in the database – if a pick list appears, make a selection and click OK.

8. Under Via Point Set Application, select whether the new set will be applied only when the route travels from Origin to Destination, from Destination to Origin, or in Both Directions.

9. Also under Via Point Set Application, the radius around the origin and/or destination can be edited (default is 10 miles). This is the radius within which an origin and a destination point must be located to trigger the via points option for this route segment. The radius is defined from the city center or postal code center.

12. In the route window, you’ll see a line inserted into the stop list under the specified origin for the via point set. Click the Add Via Set button on this line to add the point(s) to the stop list. If you decide not to use the via point(s) for this route, ignore this button and they won’t be used.

To Edit a Via Point Set

To edit a set at any time, select the Routes tab > Manage Via Point Sets. Then select the set you want to edit from the drop-down of sets, make your changes, and click Save Set.