In addition to the mileage output file, BatchPro can generate up to seven report files each time it processes an input file. Under Output Report Files, place a checkmark next to the optional report(s) you want to generate. These options are available only when “Standard” is selected as the output type.

To see any generated report, in Windows Explorer navigate to the folder where the output files were placed. Right-click the file name and open it with Notepad or Wordpad. The report types are:

The Detailed Report option generates a Detailed Geocode Report for each origin/destination pair that is processed. This file is intended for customers who want to review individual routes from the batch run.

IMPORTANT NOTE:  Selecting the Detailed Report output option will slow down the batch process. The resulting file can be extremely large, as it will contain every station location and all leg and cumulative miles along the route, followed by a summary report by railroad and state for every origin-destination pair in the input file. Hence it is recommended that this report be generated only for small batch runs.

The contents of this report are the same as in the Detailed Geocode Report in the PC*MILER Rail user interface. The output file is tab delimited and will align into appropriate columns when opened with Microsoft Excel (be sure to choose “All Files” in the file type drop-down in Excel, otherwise you won’t see the .RPT file listed).

For each O/D pair, the .RPT lists all points on the route, along with leg and cumulative mileage. Each O/D pair route is demarcated with a dashed line (-----), under which the origin, destination and corresponding line number from the .OUT file is listed. A state mileage summary and breakdown of mileage by railroad is included at the end of each route’s report. 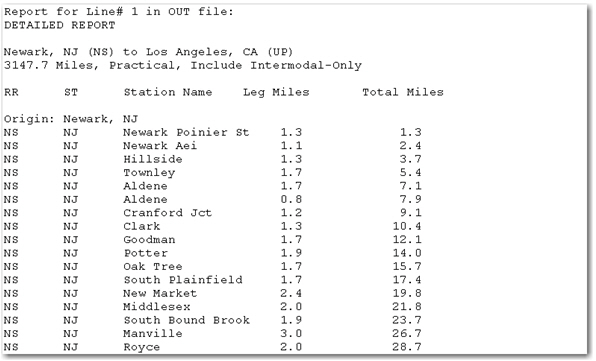