Formats for Entering Railroad Locations for a Route

To generate a route in PC*MILER Rail, at least two locations must be entered as stops. There are two ways to calculate a route:

Single Route Entry: If you know a route and just want to get the mileage, you can enter a sequence of locations and railroads manually in a single route entry window—select the Routes tab > New Route or <Ctrl+N> on your keyboard, then enter at least two stops and click Run. During stop entry, a Junction Helper becomes available when a junction between two locations is needed.

Using the AutoRouter: If you want PC*MILER Rail to suggest possible junctions and connecting railroads between two points, you can use the AutoRouter—select the AutoRouter tab on the Ribbon, or <F6> on your keyboard, then enter at least two stops and click Run.

In either a single route window or the AutoRouter window, stops can be entered using any of the formats listed below.  For either type of route entry, the correct format must be selected in the route window using the format drop-down:

If a station is served by more than one railroad, a pick list of railroads will be generated. 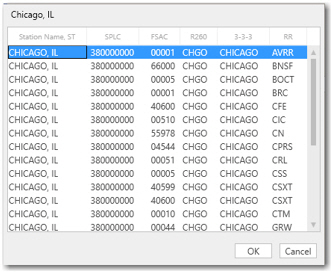