Note: Video has no sound.

The AutoRouter generates a list of all possible routes between the station locations that are entered.

Follow the steps below to generate a list of valid railroad junction sequences between any two points in North America.

1.  Select the AutoRouter tab on the Ribbon. 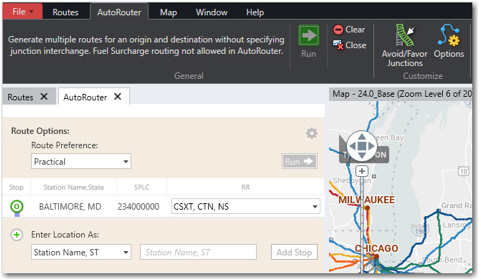 2.  To enter an origin, select a format from the drop-down menu.

3.  Type a station name or code using the selected format.

4. Click Add Stop or press <Enter> and make a selection in the pick list that opens (possible routes won’t be limited by the carrier you pick).

5. The drop-down in the RR column lists valid carriers for the entered location—uncheck any carriers that you do not wish to include. To generate every possible route, All Railroads needs to be checked. 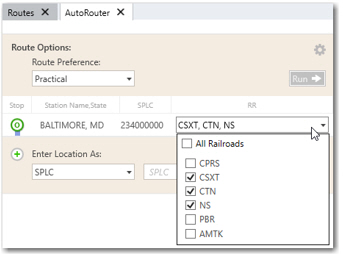 6. Repeat steps 2-5 to enter a maximum of two more stops (a destination, and optionally, a via junction that you want the route to pass through).

8. To examine any route on the list, click its View button. The route will be displayed as a single route in the Routes window and will be drawn on the map.  As a single route, it can be edited and rerun. 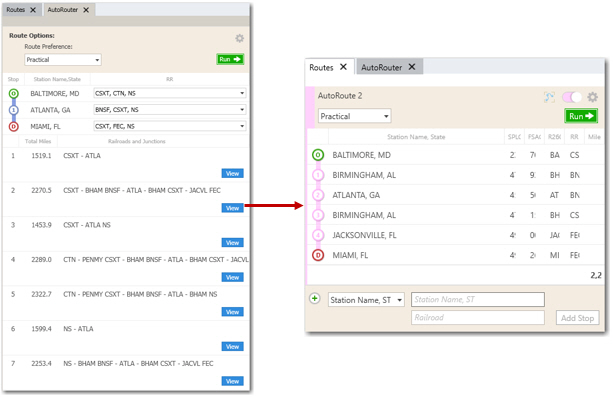 TIP: The width of columns in a single route window can be changed. When multiple single routes are open, a scroll bar appears on the right side of the Routes window as needed for browsing.

Routes with the originating or terminating carrier having a switch move only (common with terminal railroads) may be included or excluded depending on whether Include or Exclude is chosen under Terminal Switching in the Route Options dialog.  Exclude is the default option.

The generated AutoRoutes will be listed in order of fewest junctions between railroads of different families and fewest total miles. Routes are shown as a sequence of railroad SCACs and Rule 260 codes.

NOTE: The routing algorithms used in PC*MILER Rail are identical to those used in the traffic diversion studies for major railroad and government clients that Trimble MAPS has produced since 1979. The routes generated are listed in order of fewest junctions and least miles, and are not necessarily the best or most efficient routing options. They are merely feasible, practical routings based on the observation of actual, historical traffic movements over many years.